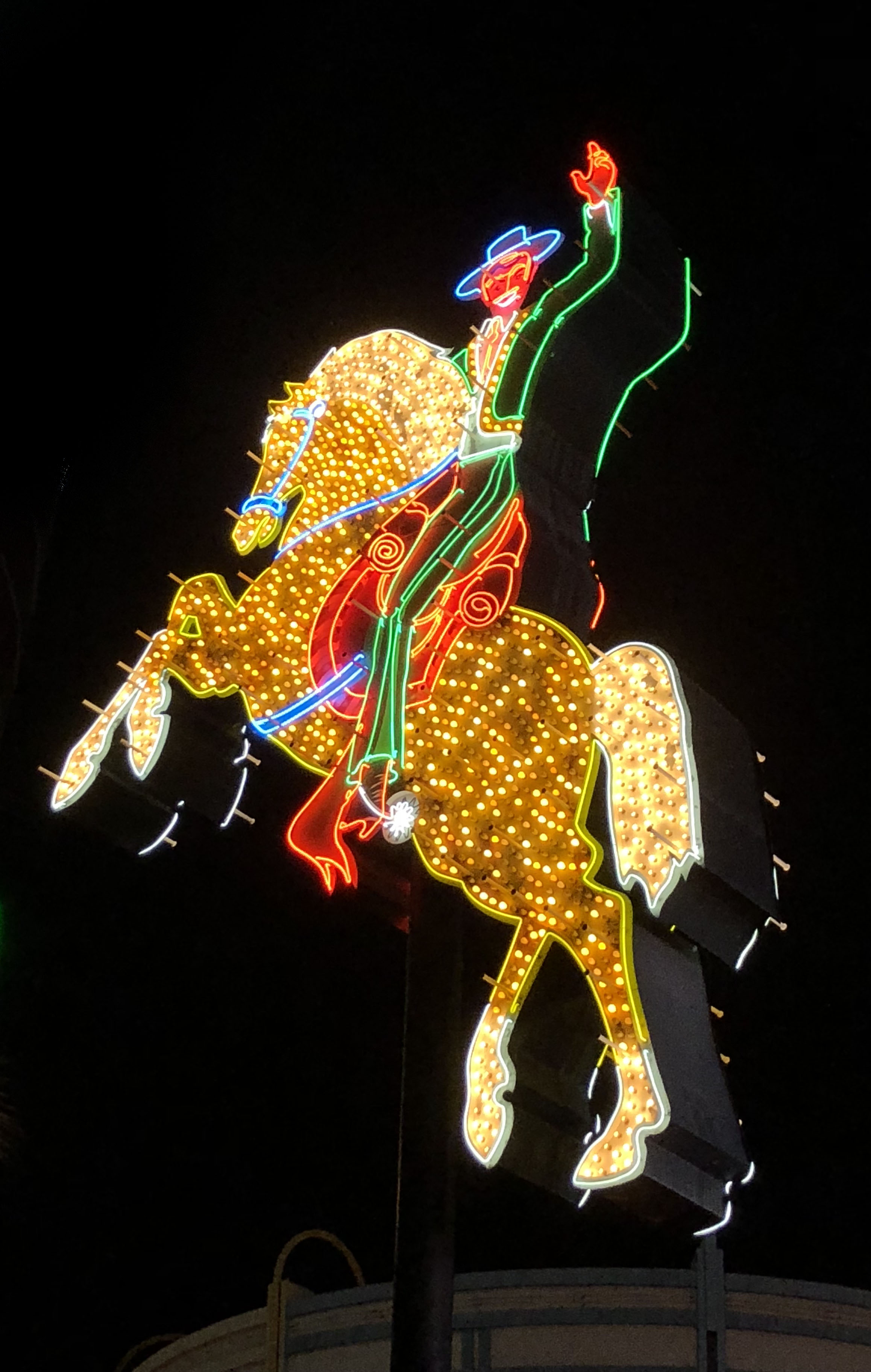 Hello, everyone, and greetings from the eerily quiet city of Las Vegas!  Due to occurence of COVID-19 in early 2020, we have been experiencing a government mandated shut down of all non-essential businesses in Las Vegas for the past six weeks.  We have a few more weeks of it ahead of us still.  This is a crazy time in many of our lives and things have definitely been stressful, to say the least.  Many have lost their jobs and finances, not to mention the losses of family and/or friends.  It has rocked our worlds and countless among us will never be the same.  As a result, many of us will be doing things differently in the future; as will I.  The storefront has closed, as I need to shift gears and focus on other areas.  Tattooing will always be a passion of mine, so I will still be tattooing, I just won't be tattooing as much.  I will be posting available session dates on social media.  Please be flexible, as my schedule will dictate frequency of sessions.  Scheduling preference will be given to clients with projects that were started prior to the COVID-19 pandemic.  And, because I have the time now, you will see me posting more frequently in an attempt to bring this website up to date.  So, stay tuned!!  Finally, I just want to thank you all for your continued love and support, especially during these uncertain times.  I miss you all very much and I look forward to catching up once we are all on the other side of this.  STAY WELL, EVERYONE!!!

Tattoo Fact of the Day: In the Maori culture of New Zealand, the head was considered the most important part of the body, with the face embellished by incredibly elaborate tattoos or ‘moko,’ which were regarded as marks of high status. Each tattoo design was unique to that individual and since it conveyed specific information about their status, rank, ancestry and abilities, it has accurately been described as a form of id card or passport, a kind of aesthetic bar code for the face. After sharp bone chisels were used to cut the designs into the skin, a soot-based pigment would be tapped into the open wounds, which then healed over to seal in the design. With the tattoos of warriors given at various stages in their lives as a kind of rite of passage, the decorations were regarded as enhancing their features and making them more attractive to the opposite sex.

Tattoo Fact of the Day: Samuel O'Reilly was a successful New York tattoo artist and the inventor of the modern rotary tattoo machine, which he patented in 1891. He began tattooing in New York around 1875. O'Reilly's machine was based on the rotary technology of Thomas Edison's autographic printing pen. It was the first tattooing device which ran off of electricity. Tattoo machines have had very few changes since then. O'Reilly owned a shop in New York City at #11 Chatham Square. Charles Wagner worked with O'Reilly as an apprentice. In 1908, Samuel O'Reilly fell while painting his house and died. The five dots tattoo is a tattoo of five dots arranged in a quincunx, usually on the outer surface of the hand, between the thumb and the index finger. The tattoo has different meanings in different cultures—it has been variously interpreted as a fertility symbol,a reminder of sayings on how to treat women or police, a recognition symbol among the Romani people, a group of close friends, standing alone in the world, or time spent in prison (with the outer four dots representing the prison walls and the inner dot representing the prisoner). Thomas Edison, whose many inventions included a tattooing machine, had this pattern tattooed on his forearm. 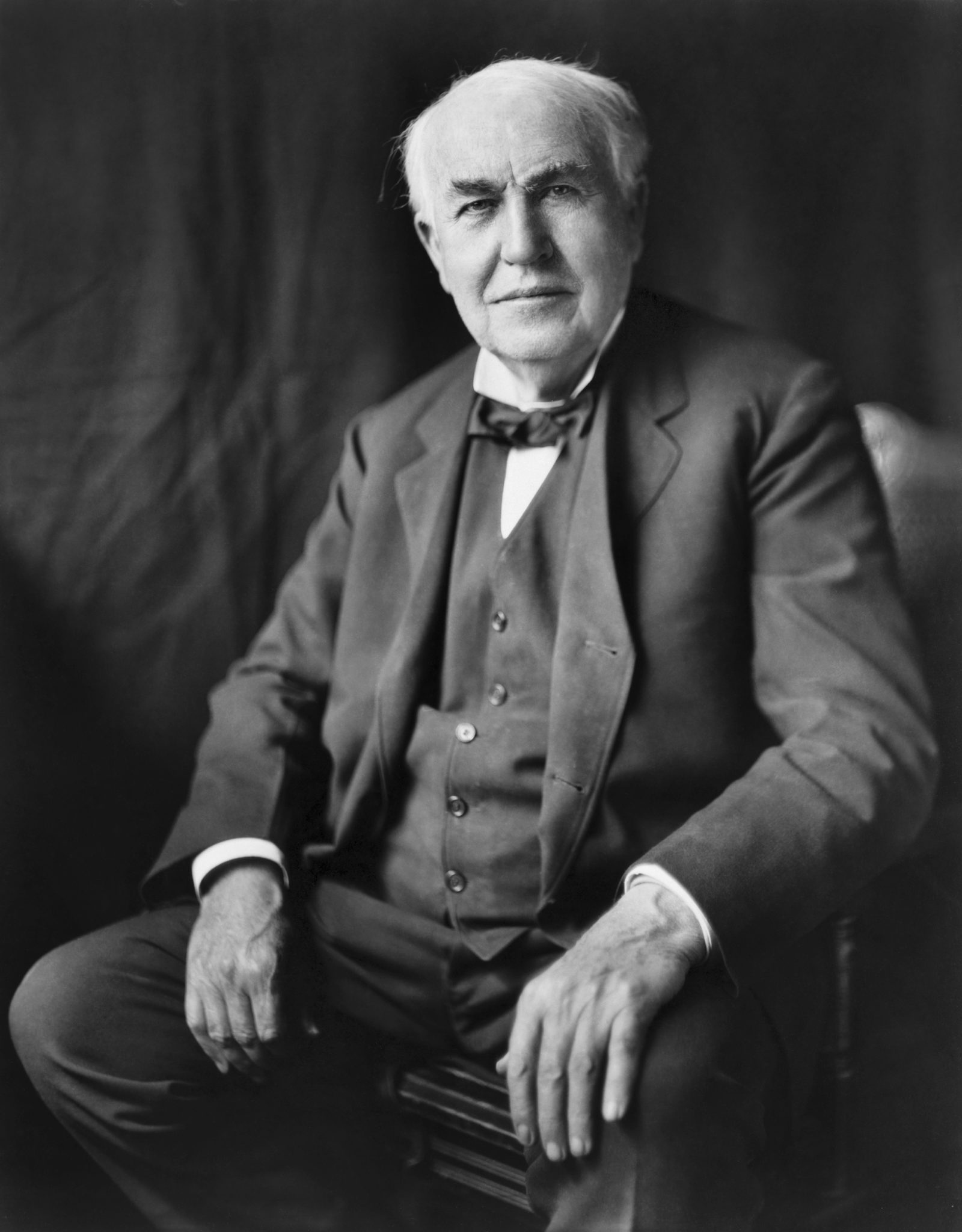 Tattoo Fact of the Day: A tattoo is a form of body modification, made by inserting indelible ink into the dermis layer of the skin to change the pigment. The first written reference to the word, "tattoo" (or Samoan "Tatau") appears in the journal of Joseph Banks, the naturalist aboard Captain Cook's ship the HMS Endeavour: "I shall now mention the way they mark themselves indelibly, each of them is so marked by their humor or disposition".
Tattooing has been practiced for centuries in many cultures spread throughout the world. The Ainu, an indigenous people of Japan, traditionally had facial tattoos. Today, one can find Berbers of Tamazgha (North Africa), Maori of New Zealand, Hausa people of Northern Nigeria, Arabic people in East-Turkey and Atayal of Taiwan with facial tattoos. Tattooing was widespread among Polynesians and among certain tribal groups in Taiwan, Philippines, Borneo, Mentawai Islands, Africa, North America, South America, Mesoamerica, Europe, Japan, Cambodia, New Zealand and Micronesia. Indeed, the island of Great Britain takes its name from tattooing, with Britons translating as 'people of the designs' and the Picts, who originally inhabited the northern part of Britain, which literally means 'the painted people'. British people remain the most tattooed in Europe. Despite some taboos surrounding tattooing, the art continues to be popular in many parts of the world

Lasers work by producing short pulses of intense light that pass harmlessly through the top layers of the skin to be selectively absorbed by the tattoo pigment. This laser energy causes the tattoo pigment to fragment into smaller particles that are then removed by the body's immune system. Researchers have determined which wavelengths of light to use and how to deliver the laser's output to best remove tattoo ink. (If you're wondering if the laser might also remove normal skin pigment, don't worry. The laser selectively targets the pigment of the tattoo without damaging the surrounding skin.)

Thirty-six percent of those ages 18 to 25, and 40 percent of those ages 26 to 40, have at least one tattoo, according to a fall 2006 survey by the Pew Research Center. The National Geographic News stated in April 2000 that 15% of Americans were tattooed (or approximately 40 million people!) Esquire Magazine estimated in March 2002 that 1 in 8 Americans was tattooed.

According to the American Society of Dermatological Surgery, they stated in 2005, that of all the people they treat with laser and light therapy, only only 6% are getting a tattoo removed.

A 2006 a study done by the Journal of the American Academy of Dermatology found that 24% of Americans between 18 and 50 are tattooed; that's almost one in four. And the survey showed that about 36% of Americans age 18 to 29 have at least one tattoo!

Make no mistake about it, the tattoo industry is hot property. There are an estimated 20,000+ parlors operating in the United States, according to a U.S. News & World Report article, which said, on the average, an establishment is being added in the country every day. The article ranked tattooing as the sixth fastest growing retail venture of the 1990s, right behind Internet, paging services, bagels, computer and cellular phone service.

Tattoo Fact of the Day: When receiving a tattoo, your skin is pricked between 50 and 3,000 times per minute by a needle in the tattoo machine. Follow the link to learn more about how the tattoo machine works! https://health.howstuffworks.com/skin-care/beauty/skin-and-lifestyle/tattoo.htm

King Harold II of England had a number of tattoos. After his death at the Battle of Hastings in 1066, his tattoos were used to identify his body.

"People with tattoos out-drink people without them."
In a study published in Alcoholism: Clinical & Experimental Research, French researchers approached people leaving bars and asked if they'd be willing to take a breathalyzer; they also asked if the respondents had tattoos or piercings. Men with tattoos and piercings tended to have had 44% more alcohol than those with neither; women with both tattoos and piercings tended to have had twice as much as women who had neither.
- From AskMen.com
Read More

Just wanted to let everyone know that Nando is our new in-house artist. He has 18 years experience and does it all. Check his work out or visit his website Nandomas.com

On 10/15/11, stop by the shop to get your $30 breast cancer ribbon tattoo.  We will have various flash designs to choose from and availability is on a first come, first serve basis.  All proceeds will be donated to the Nevada Cancer Institute.  Come on out and show your support!

Tattoo Now Up and Running

We are so happy to now be powered by tattoonow.  Thank you Brian and Gabe forall of your hard work!

We are very happy to have a new website powered by tattoonow. 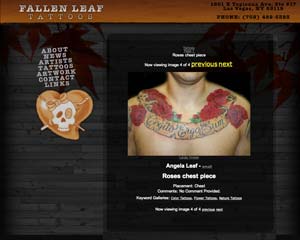 You can email Fallen Leaf Tattoos and Piercings by filling out this form. Thanks for your support!